What to do with outdated production platforms in the North Sea? One is now being used to produce green hydrogen

Popular Dutch news programme EenVandaag aired a report on 1 August about the outdated drilling platforms in the North Sea. Sylvia Boer, director of AYOP, Lex de Groot (Neptune Energy), René Peters (TNO), Mark Kappen (REYM) and Rowald Elting (Koole Contractors and Decom Amsterdam) were interviewed about the issue. The show can be watched via the link below and a summary of the show in English is included below that.

The Dutch part of the North Sea alone contains between 130 and 150 outdated oil and gas platforms. Some are given a new destination; they are used to produce green hydrogen gas from seawater using wind energy.

Q13a is a repurposed production platform, where Neptune Energy is collaborating with parties such as research agency TNO on the ‘PosHydon’ project.

‘First on this scale’

“Q13a is still used for extracting oil and gas, but as of recently it also makes hydrogen gas from salt water using wind energy,” says Lex de Groot, director of Neptune Energy, the largest gas and oil producer in the Dutch part of the North Sea.

“This offshore demonstration project is the first on this scale, globally. Never before have there been experiments with the production of hydrogen gas from seawater and transportation of the gas via gas pipelines.”

Production platform Q13a makes green hydrogen without releasing any CO2, says De Groot. “Some 95 percent of the hydrogen produced worldwide is so-called grey hydrogen in which CO2 is released. And this is not where we want to go in the future. Our goal is fossil-free hydrogen and we’re now studying how to produce that on a larger scale.” 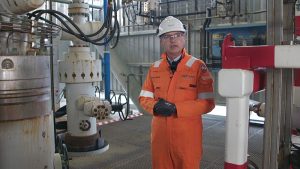 The hydrogen gas can be used by industry or provide households with electricity, explains De Groot. Because the production platforms are already equipped with shore-bound gas pipelines, transporting the gas is fairly simple. It also makes it unnecessary to install new power cables from the wind turbines, saving a great deal of money. It would be especially useful for future wind farms far out at sea, both for their own use and to supply power for hydrogen production.”

Why is the experiment currently exclusive to Q13a and not also being performed on a dozen or so other platforms? “Hydrogen production require electricity, lots of wind energy, and we don’t yet have enough wind turbines,” says De Groot.

“But we are working as hard as we can to get everything ready. The faster we can scale up green hydrogen, the quicker sectors such as the chemical industry and steel production can increase their sustainability levels.”

In addition to Q13a there are between 130 and 150 outdated platforms in the Dutch part of the North Sea. Only a proportion of them are suitable for the production of hydrogen gas, however. Despite that, oil companies refrain from dismantling them as it is expensive to decommission the installations, and – with the current oil and gas prices – it may be profitable to keep production going a little longer.

Director Sylvia Boer of Amsterdam IJmuiden Offshore Ports (AYOP) believes that everything is going far too slowly. Last year, eleven offshore companies from the Amsterdam region joined forces under the name DecomMissionBlue. Together they can recycle 97 percent of an old platform in just a few months. Some 90 percent has passed its expiry date and has to be dismantled, Boer estimates. But business is slow, for now. 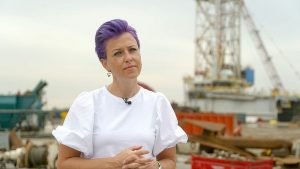 “I am constantly waiting for a decommissioning peak,” Boer comments. “Every year I think: here it comes, but then things are delayed. Again. The urgency isn’t great enough, mainly because decommissioning isn’t compulsory. We should have regulations like those in Australia, where companies have to clean up their scrap at sea within a certain period.”

More to the point, she states: “I think that you also have to take responsibility as a company. You’ve benefitted long enough from the North Sea and the reserves it contains. It has earned you a lot of money over the years. I think these companies have obligations to the sea and the Dutch government to dismantle these platforms.”

‘Old should make way for new’

This is crucial, says Boer, because the North Sea is getting ever more crowded. “The sea is huge, but there’s also shipping, fishery and ecology to take into account. The old fossil trend should make way for green energy and the other activities we perform in the North Sea.”

Owner of production platform Q13a, Lex de Groot, and his company have 29 other platforms that are still being used to extract gas. “Once they stop producing gas, the majority won’t be suitable for reuse, and we plan on decommissioning them completely. In addition, there are various hubs where platforms come together with major gas pipelines toward the shore. Here we can perform electrolysis in order to realise the energy transition as cheaply and cleanly as possible.”

The North Sea has a depth of 46 metres and a surface area of 575,000 square kilometres. La mer du Nord, Nordsjøen: in addition to part of it being Dutch, the North Sea also belongs to the British, Belgians, French, Germans and Norwegians. And to some 220 varieties of fish. The Dutch part is also known as the Dutch continental shelf and comprises 58,500 square kilometres (sixty times the Veluwe nature reserve), of which 3,600 square kilometres are designated as a shipping route.

The North Sea contains 160 oil platforms, 2,500 kilometres of pipelines and 4,000 kilometres of cable. It is also home to Europe’s largest oil and gas reserve. The North Sea is designated to have 11 gigawatts in wind energy by 2030, 2.5 of which is already realised and 1.5 currently under construction. The sea also has some 3,000 shipwrecks. And it continues to expand: according to the latest calculations, the Dutch sea level will be 39 to 94 centimetres higher by 2100.